G&V and Rolande open their first LNG station in Belgium

Commissioned as part of the BIOLNG4EU project, which is 50% co-financed from the Connecting Europe Facility, the new Antwerp LNG location is the first of four Bio-LNG stations that Rolande will open across the Netherlands and Belgium. 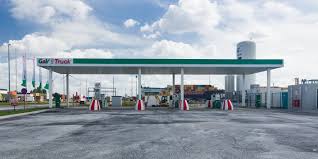 With this partnership, the companies aim to create a covering LNG station network in Belgium, with new locations coming up in Habay and Waregem. ‘In succession to the Netherlands and Germany, where we opened our first LNG station last month, we now also entered the Belgium market. In this way we make important steps to create a full covering European LNG network that is necessary to put (Bio-) LNG as a fuel even more firmly on the map’, said CEO Rolande, Jolon van der Schuit.


Sustainability
‘Thanks to joint-venture and long-term partnerships with strategic partners such as Rolande within the joint-venture LNG. Solutions Belgium, we have grown to be a referential company within the industry on the area of sustainability’, commented CEO G&V Energy Group, Xavier Dewulf. Headquartered in Tilburg (the Netherlands), Rolande exploits a network of 15 (Bio-)LNG stations in Europe.

Following the acquisitions of Esso stations in Brussels, Hengouwen and the Vlaanderen regions between 2012 and 2013, G&V Energy Group became the largest gas stations independent player in Belgium. The company currently operates more than 200 gas stations and 26 convenience stores under the brands G&V, Esso, Shell, Total, Q8, ENORA (CNG) and Breakpoint.